This week we’ve been taking time in the office to reflect on the significance of the formal, national apology that Kevin Rudd delivered in parliament on February the 13th, 2008. It still today stands as a significant moment in our past, in which as a country we came together to own up to the deep scars that are now embedded into our national story. The scars from which we are still trying to create meaning and to pave the road to move forward, together.

We mirror the apology echoed in 2008…

“We apologise especially for the removal of Aboriginal and Torres Strait Islander children from their families, their communities and their country. For the pain, suffering and hurt of these Stolen Generations, their descendants and for their families left behind, we say sorry.

Instead of sharing our perspectives, we wanted to amplify the voices of those who have moved us this week. These are their words, their stories…..

Shelley is a friend of ours and we are incredibly proud of the continued work she does. 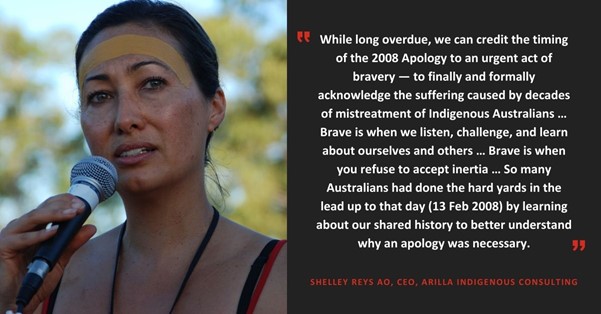 We recommend you follow or work with: Arrilla Indigenous Consulting

This snippet of a life-long story was shared by Reconciliation Australia, the national body for reconciliation in Australia. This is a reflection from Stolen Generations survivor Aunty Julie Black, a 64-year-old Barkindji woman, was taken from her mother shortly after birth. It’s easy to feel like the Stolen Generation was before our time, but it is when you hear lived experiences by survivors today that you remember that behind the Stolen Generations policies there were people, and children, who are still alive and in need of support.

Norleen Brinkworth – From Growing up in Australia

“I was born in 1947 at Yarrabah mission, an Aboriginal reserve run by the Anglican Church of England near Cairns, north Queensland. This mission was where my grandparents, both paternal and maternal, grew up from around the turn of the twentieth century.

Taken from other places in Queensland, they became part of what was to become known as the ‘Stolen Generations’ or ‘stolen children’. The government policy at the time was to assimilate them away from their mothers, family and familiar environment, placing them in an institution that was highly controlled by total strangers to these children. Sadly, many of these young children would suffer from the repercussions of this ordeal both then and there, and also later in life.

Unfortunately, none of my grandparents or my parents lived long enough to hear the words of the then prime minister, Kevin Rudd… I think closure of some sort would have been provided to them if they had…

My paternal grandfather spent seventy-four years as a victim of the Stolen Generations…He left this earth as loving, kind, caring, generous, compassionate man, despite the traumatic upheaval forced upon him as a three-year old toddler.”

We recommend for your next read: ‘Growing up Aboriginal in Australia’ – edited by Anita Heiss 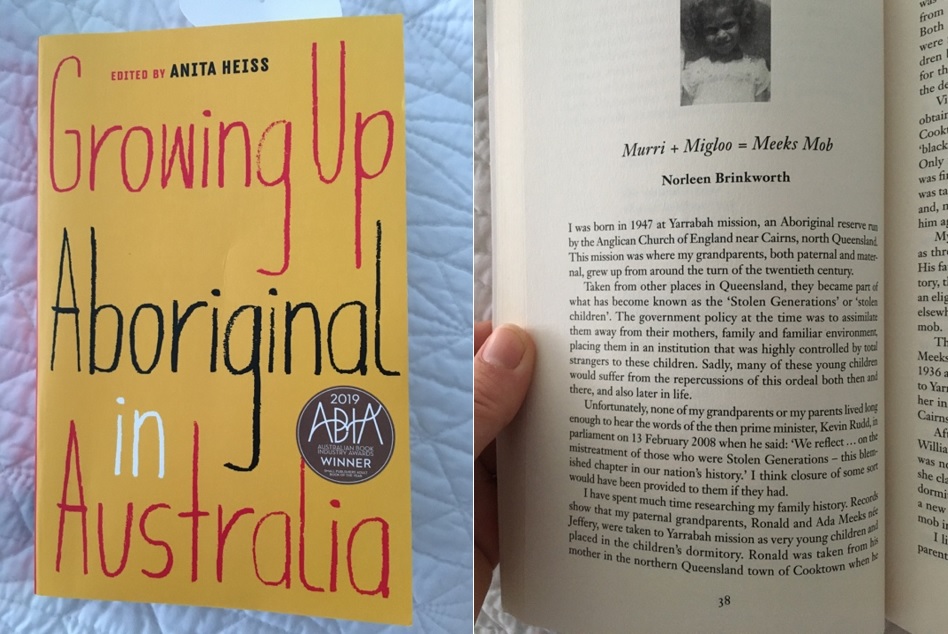 Gregory recounting seeing his mother for the first time

This is a sad and moving extract from Karijini Mirlimirli : Aboriginal histories from the Pilbara.

“The time came when the mission was told to close. They had taken me and my brother Archie, he was three years younger, from our parents’ years before. Now because they couldn’t get their act right, we were a burden, and they didn’t know what to do with us kids. One of the white missionaries decided that the thing to do with us was return us to the parents.

I had never seen my mother in my life. My life in the Christian mission completely cut my ties to her. It did not even let me know who she was, let alone tell me if she missed me. I did not know that my mother was an Aboriginal mother.

Never mind, they took us back to Mulga Downs Station where she lived. There was a reserve at Mulga Downs where the Aboriginals lived. It was separated from the white people. So off we went, me and my little brother Archie, to go to Mulga Downs and the white European homestead. But they didn’t take us to the homestead. They stopped at the reserve and told us to get out. I was speechless. Then they pointed to an Aboriginal woman and said, ‘That is your mother.’ And I went, ‘Oh-oh,’ I could not believe it. No one had prepared me to understand my past. ‘No,’ I said, ‘she’s not my mother, the skin is different, darker, black, not the right colour.’

It was a big shock, first time I ever see my mother.

I think it was a shock for her, too. She knew who we were. But she was really waiting to see what we gonna do.

In fourteen years at the mission I had learned nothing about my own culture, I had been taught little in the white education matters. But we had to say grace before every meal, prayers at night, and attend Sunday School each week.”

The 2021 State of Reconciliation Report in Australia

We loved the recently released ‘Moving from Safe to Brave’ State of Reconciliation Report from Reconciliation Australia. Here is a powerful excerpt from the start of the report:

“The five pillars of reconciliation, as set out in detail in the report, give us a strong framework for attention. Action on these pillars can only be realised by being truthful; truthful to ourselves and truth-telling. That truth must begin by owning our personal biases, and confronting our nation’s collective racism, both overt and covert.

Bravery in the face of racism will be our change agent. Now is the time to take a deeply personal journey and have the uncomfortable conversations. And we need to extend those conversations to those within our sphere of influence, both professionally and personally. We might feel a degree of safety when discussing our organisation’s Reconciliation Action Plan (RAP), for instance, but are we prepared to step up our leadership roles, tackle racism head on and drive a reconciled nation at the risk of losing the support of constituents, or shareholders, or colleagues along the way?

Personal conversations are perhaps even harder to begin but are critically important. Are you willing to challenge those you love despite the fear of losing their respect? Are you willing to risk social isolation or your popularity at the next dinner party because you’ve challenged a racist comment? When we dig deep, we will stand together once more, in the knowledge that we are a mature and courageous nation. And the rewards of our actions will enrich all Australians and our national identity.

Brave is when we listen, challenge, and learn about ourselves and others. Brave is saying that you’re ready to delve into the very things that hold you together; your bias, beliefs and values. Brave is when you refuse to accept inertia.”

Download the report here: ‘State of Reconciliation in Australia’

We will continue to listen, learn and find our way together

These are just four short perspectives that share the significance of those words that echoed not just in parliament house, but across the nation. We would like to credit the above words and stories to those who experienced them, and we share them with the deepest respect.

We will keep working hard to share the voices and stories that help all of us to understand the significance of the trauma that has passed and continues to impact on the Aboriginal community. We will do so with open minds and heart, to try and work together with Aboriginal voices, perspectives and wisdom driving change.