I can’t hear you when you’re screaming at me - mwah.

Let me write something that may get right up your nose.
I’d apologise in advance, but that would be defeat the whole point, so I’m marching on unapologetically. Hopefully the destination will justify my means.

We work with a lot of people who would claim to be Inclusive with a capital I!
But right now, with the world in a such a state of pain, and everyone frustrated and on edge most of the time, increasingly people are only truly inclusive of those who want to applaud their tightly held views.

A well-intended group of people wanted to have a national conversation about sexual harassment and gender equity. Frustrated by the lack of progress, they scream at the Prime Minister to join the conversation.
He joins (probably reluctantly).
He talks about how his “Mum, wife and daughters define me”.
Within hours he is mocked, lampooned and Beetoota’ed.
He exits the conversation, never to return and sends a delegate out in his place.
So, the national conversation will be had, but sans the Prime Minister.

Sure, Scott Morrison’s narrative could have been brought up to date.
It is an age-old argument that men should understand gender equity for its value to society, and not need to reference wives or daughters as their only reason. We all get that.

But if you stand back for a moment, it’s worth wondering whether the national debate is better or worse off now that it is without the Prime Minister in the chat room.

The reality is that PM ScoMo’s ill-fated venture into this debate is just one example of many.

There’s so much frustration in so many of us right now, that it’s easy to forget that we’re just one perspective, one lived-experience, one way of thinking, one way of looking at something. Race. Politics. Feminism.

I was talking to a person today that was instrumental in the successful Marriage Equality debate. You’ll remember that fractious awful process, the horrible in-the-sky-sign-writing, the chasms of divisions that opened up everywhere – in families, communities, religions, and workplaces.

Then out of that forest of thistles emerged a conversation about love. Despite all the hate (and sky writing) being thrown directly at them, the LGBTQ+ community changed their tact from fighting to ‘stop hate’ to one of ‘love is love’. We were asked not to ‘decide and vote’, but to think of the human rights, and right to love, of our families, friends, and neighbours.

We did go and vote, and we overwhelmingly won the day. That ‘love is love’ message, which encouraged us all to join the conversation, meant that today all of us are free to marry, whoever we love. 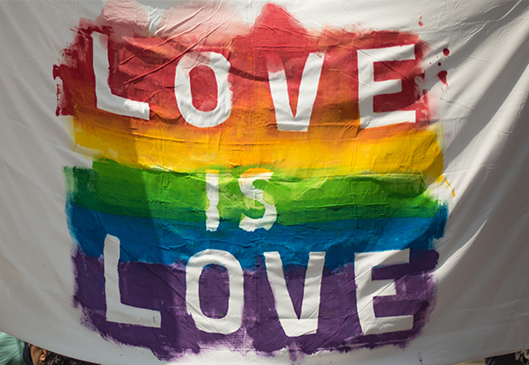 I get the frustration

I get angry too. Why haven’t we enacted the Black Deaths in Custody recommendations? Why haven’t we eradicated sexual harassment at work? Why are we burning through the planet’s oxygen? Everything that matters is too slow, too hard, and too overwhelming. It makes us want to scream. And if you need to, go ahead.

Just don’t expect anyone to hear your words through the screaming.
If you want to influence – change someone’s mind – you must have a conversation. Not just a lecture, but a genuine conversation, where you find the meeting of minds.

We have much more in common than we have disagreements.

Find the bridges or build them.

There’s something about putting down your tightly held sword of righteousness and listening for other views that is very liberating. Most of the time, we’ve held those swords for too long, and they’re heavy and we’re exhausted. And frankly, it must be noted, that if we had the power to change something, we would have changed it by now.

To make the changes we need or want, we need more of us in the conversation, understanding the issues, and learning what we can each do.

So, maybe when we’re at our most frustrated and cannot see any bridge, we need to be the bridge. Listen first and then speak. Hear where other people are up to, and help them join the conversation, rather than scream at them about how stupid, or ignorant they are.

In the last election, a gaggle preaching people took a 14hour bus ride to an industrial town and told them they were ignorant, and that neither they, nor their children, deserved future employment. The town that received that bus, promptly voted the bus down at the next election.

Today, in that same town, conservationists, miners, and local government have downed swords, and found a future together. They built the bridge then walked on to it.

Look to the change makers

When you want to see who makes change, look to the change makers.
When someone tells me they’re a change-maker, I ask them why they think so? If they say, “my view was in xyz media”, or “abc published my perspective”, I then ask them what changed as a result? Having a view – even a published one – is not a change.

You see, when you meet real change-makers, they’re calm, and they walk easily past the halfway point of any bridge. They thank people for turning up to the conversation. They listen before they talk. They’re patient to meet people where they’re at and walk beside them. They’re clear, but there’s no screaming.

Create conversations that people want to join.
Listen to genuinely understand. Take away the eggshells.
Talk like you want someone to listen. Like the audience matters.
And be very comfortable that you can get smarter. We all can. Be open to that possibility in every conversation.

After all, if you’re screaming, no one is listening.

Footnote: I’m also heavily influenced by my grandmothers, my Mum, and my daughters. All wonderful strong, awesome women. Just saying.

“Don’t just stand back and throw rocks”: Five business lessons from the Eddie McGuire saga
read more
A Time To Listen
read more
Are You Who You Say You Are? – A Tale Of Two Leaders
read more
Belonging in the Park
read more